"We have something crazy about to happen," says celebrity YouTuber MoVlogs in a video before showing two white tiger cubs in the trunk of a car. Later the cubs can be seen in his home in Dubai and a backyard swimming pool, where he and family members play with them. The clip has close to three million views, and there are dozens, if not hundreds more like it on the video platform. On other social networks like Tiktok or Instagram posts showing social media influencers and celebrities posing with tiger cubs and other protected wildlife are only a few search keywords away.

Photos of a baby monkey or lion cub might seem harmless or cute at first, but keeping wild animals such as lions and tigers as pets can negatively affect their physical and psychological well-being -- it is also outlawed in some jurisdictions. Then, there is also the question of what happens to the animals when they grow up and become harder to handle and much more expensive to feed and keep, says Foeke Postma, who works as a researcher and trainer at investigative outlet Bellingcat.

For his latest investigation, Postma dug into Dubai's underground wildlife trade, some of which is advertised and organized via Instagram. The United Arab Emirates outlawed the ownership, trade, and transport of dangerous or exotic animals in 2017, but Postma found the trade continues despite these laws.

The animals' handlers are making money --potentially illegally-- by renting or selling exotic animals. For these individuals, social media functions as free advertising and a platform to find new customers. Illegal wildlife trade is a massive industry, bringing in between $10 billion and $20 billion annually, according to Interpol.

Postma first became interested in the subject after seeing news reports about Dutch soccer player Memphis Depay, who lives in Dubai and had posted photos of himself playing with a liger cub -- a cross-breed between a lion and a tiger. "Nobody really seemed to ask the question: where did this cub come from?" he says, adding that Depay later said the cub had come from a private zoo. "That was basically the question it started with: how do you get a cub in Dubai? What kind of zoo would take a cub and then deliver it to someone's home for, you know, an Instagram photoshoot or a prop in a rap video?" 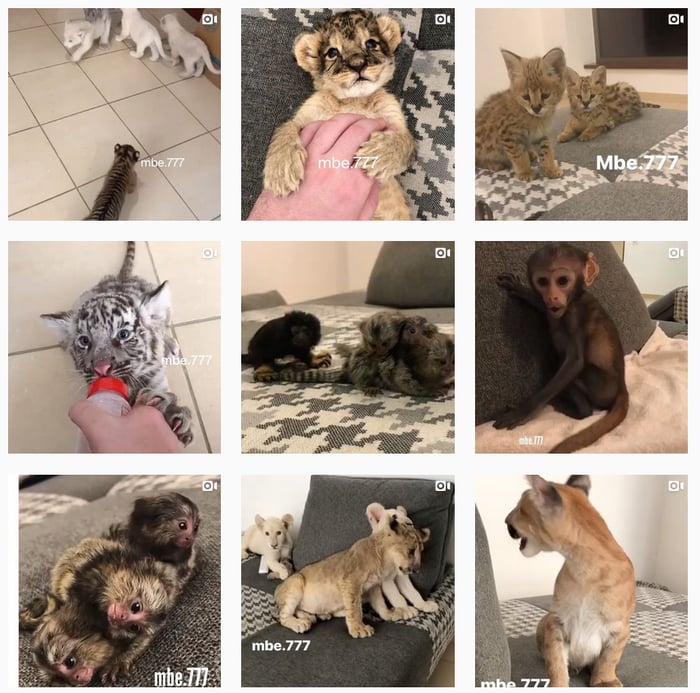 Postma started by searching online for "tiger cub" or "lion cub" in combination with search terms related to celebrities when he came across MoVlogs' video. While the video never shows the people who delivered the cubs, the description mentions an Instagram account called @MBE.777. Postma then used a sock-puppet account to send a follow request to the private Instagram profile and was accepted. MBE.777 set up the profile like a window shop, he says, filled with photos of different animals. "There's no description. There's no profile information. There's nothing. Only his [user-]name is overlaid over the images," Postma says.

He started going through the images looking for clues and any indications of where MBE.777 kept the cubs. To figure out who the person behind the MBE.777 account was, Postma went back to MoVlogs' video, this time going through frame by frame. "In a couple of frames, the camera pans around while they're at the swimming pool. So when they're swimming with the baby cubs, you see two individuals who weren't there at the beginning of the video and who are never introduced," he says. He spotted the pair in other video sections, revealing their faces and the way they dress. Postma then started noticing one of them in other photos, sometimes tagged with the handle MBE.777.

"The features match, so you don't only see this person when the handle is tagged. You also, for example, can tell by the hands and the arms that you saw on MBE.777's profile feeding a tiger cub," he says. Sometimes that same person could also be seen in the reflection of a TV or window in photos posted by celebrities playing with the tiger cubs, he says. "That quickly led me to conclude that, well, that is most likely MBE.777," Postma says. He still doesn't know the person's name, but he knows where he lives. Based on photos of the apartment posted by MBE.777 and people related to him, he was able to geolocate the exact building by looking.

Geolocation of the apartment based on buildings and company logo. Credit: Foeke Postma / Bellingcat

Now Postma had the location of the apartment where the cubs were being kept. But he was still missing other pieces to the puzzle: where the animals are bred and where they end up when they are older.

Whoever was breeding the animals wasn't tagged by the celebrities and influencers posing with the cubs, but he found a clue in another news story. "That article mentioned an Instagram handle, ‘Safari__Dubai.’ And I started looking at that profile,” he says. “And then I could already tell, this is the same man I saw in a couple of these frames in the MoVlogs video, together with who I suspect is MBE.777." A quick search for the two usernames together brought up some pictures and Instagram stories confirming his theory. In local news reports, the man claims to be holding and breeding the animals only as a hobby, but via a connected phone number, Postma came across online marketplaces where animals are advertised for sale.

Postma also looked at MBE.777's followers and who the account was following. "He had about 14,000 followers already. But he only followed about 35 people when I started following him," he says. Postma started looking into these accounts. The majority turned out to be celebrities or influencers. "If you browse back far enough, you could see [them] playing around with a tiger cub at a location that was not suitable for these animals. So a hotel room, their own homes, you name it." Using their unique stripe patterns, Postma was able to identify and track this tiger and others. This way he found out that the tiger cub eventually wound up in another questionable private zoo in Dubai.

Postma wasn't able to answer where all of the cubs ultimately went. In early posts, MBE.777 always had around five cubs, he says. "But they were always young cubs. So the rotation was very quick, in the sense that you didn't see them a couple of months later anymore," he says, adding that the same was true for Safari_Dubai. "On one occasion, you would see him driving around, and he would be behind the steering wheel holding two newly born Tiger cubs. And a couple of weeks later, you wouldn't see any trace of those cubs anymore. Not at his own home, not anywhere else. So it's still a big mystery." 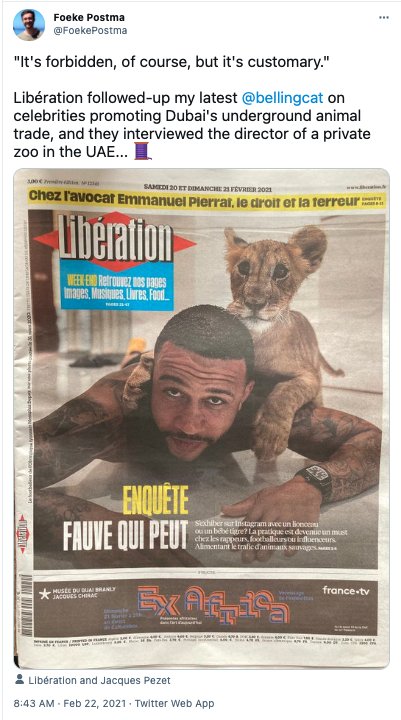 Postma hopes his research will lead to more OSINT investigations into wildlife trade,  as well as environmental and animal protection issues in general. "I think in terms of open-source investigations, this is not a super popular area to look into. So I'm hoping that it inspires people to do similar kinds of stuff," he says. "Of course, conflict and politics are the most popular areas to this expertise. But there's so much more you can do with it."